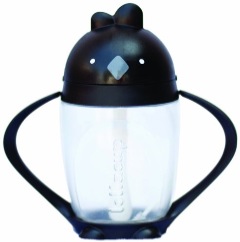 I wanted to mention the Lollacup for a few reasons. I saw it on Shark Tank a few months ago & fell in love. On that note, a million other people saw it on there & felt the same thing. So… it’s backordered until the beginning of September, but possibly earlier. The innovative feature of the Lollacup is that the straw is weighted, so no matter which way your toddler is tilting the cup they will be able to get the liquid from the bottom. On the downside, I’ve heard a lot of leak issues, because there is no valve to keep the liquid in. A big plus to the Lollacup is that it is entirely made & sourced in the USA. You can find out more info here (& hopefully be able to order one soon!). I’ve also heard of some issues with the plastic quality of the cup, but I’m thinking most of these issues will be fixed with the new $$ they aquired on Shark Tank.