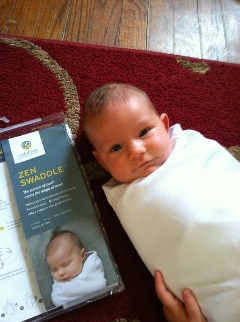 I was a little wary at first. Sounds like a great idea but would it really work? Would it really be soothing? So I tested in out on baby Hazel. She’s a swaddler Houdini! 🙂

Surprise, she did like it! In fact, she was a little fussy when we laid her down on the floor and after I swaddled her she calmed right down. A feature of the Zen Swaddle that I really liked was that the swaddle “wing”, that crosses over the baby, actually wraps around the back of the baby and then secures with Velcro, so the weight of the baby also keeps the swaddle nice and snug.

The Zen Swaddle is made from 100% cotton, and it is super soft! It has an inner pocket for smaller newborns so their legs are nice and snug, and then it can be used, in the larger pocket, all the way up to 14lbs or 26” in height. What a great idea!!

The Zen Swaddle is also great for babies who like their arms to be free. It is capable of swaddling just the torso and legs.

Here’s a video from Nested Bean’s website showing the swaddler in use:
It retails for $39.99 and we will be carrying it in the Binx pop-up Holiday Shop in a few weeks! If you need it before then please check out this list of current retailers on their website.