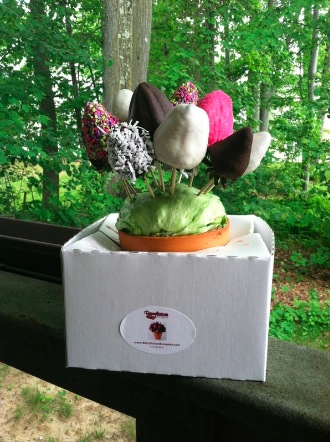 Last week I had the pleasure of reviewing (and sampling) some delicious strawberries from Berrylicious Bouquets. The bouquet that was delivered was The Sweet Dozen Bouquet. It was yummy! They were chocolate covered berries & some had special toppings. My fave topping berry was the coconut covered berry. The other toppings that were included were flower sprinkles, sanding sugar, and the other berries were white chocolate and dark chocolate. They came in a lovely terra cotta pot (which can be painted to any color you wish). Berrylicious Bouquets were recently named 2012 Best Of Saratoga candy store, which is a huge accomplishment since they are a business that is just rounding their first anniversary! Congrats to them on that great award! Wouldn’t these be adorable as centerpieces at a baby shower, or a yummy take home favor? They also deliver locally for only $5! Definitely Delish!

To find out more & to order your Berrylicious Bouquet visit their website here www.BerryliciousBouquets.com.